NASA has inflated the BEAM (Bigelow Expandable Activity Module) module on the ISS. Check out the cool time-lapse video of the expansion above! The below image from NASA shows the location of the expandable habitat in the context of the whole space station.

During the next week, leak checks will be performed on BEAM to ensure its structural integrity. Hatch opening and NASA astronaut Jeff Williams’ first entrance into BEAM will take place about a week after leak checks are complete.

BEAM is an example of NASA’s increased commitment to partnering with industry to enable the growth of the commercial use of space. The project is co-sponsored by NASA’s Advanced Exploration Systems Division and Bigelow Aerospace. 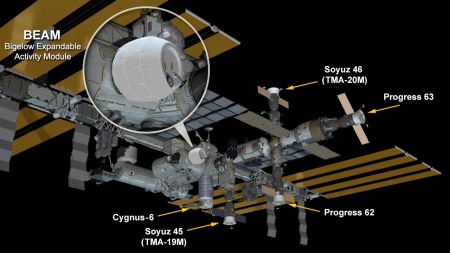 Today marks 15 years of continued life in space aboard the International Space station! From CNN:

Continuous human habitation in space began 15 years ago, when three people stepped onto an orbiting laboratory that space agencies see as a springboard to Mars.

On November 2, 2000, a Russian Soyuz rocket docked at the International Space Station carrying Expedition 1, made up of NASA astronaut William Shepherd and Roscosmos cosmonauts Yuri Gidzenko and Sergei Krikalev.

For 136 days, 17 hours and 9 minutes, they lived in the narrow quarters of the station as it zipped silently around Earth at 5 miles per second, 250 miles above its surface.

The first crew on the International Space Station arrived on November 2, 2000.

To amuse global audiences, they played with weightlessness on camera. But mostly, they carried out experiments in the world’s only microgravity laboratory. NASA says breakthroughs have been achieved there that would not have been possible on Earth.

The station has been continuously inhabited since, and on Monday, to celebrate the anniversary, the current crew of Expedition 44 will talk live on camera.

Two of them, NASA’s Scott Kelly and Roscosmos’ Mikhail Kornienko, are on a one-year mission to test the effects on the human body of long-term stays in space. The experiment is a precursor to sending people to Mars.

To celebrate 15 years, through interviews with astronaut Dough Wheelock, ABCnews features the 15 secrets of living outside the earth. Maybe one day when we’re all living in space, we’ll find these tips useful!!

When you live and work at your office and can’t exactly go anywhere else, alone time is crucial.

“We each have a crew quarters about the size of a phone booth and you can go there to relax and sleep, email and listen to music and get your wits about you,” Wheelock said.

Having a hobby helps, too. Wheelock said he kept a journal and wrote poetry. Anderson played the keyboard and wrote music.

The sterile environment of space has a funny smell.

“Your sense of smell is a little bit dulled,” he said. “Everything smells sort of like the exhaust on a computer or TV. … That plastic burning smell.”

Space cuisine just doesn’t compare to the pizza, barbecue and hot wings back on Earth, but condiments can help kick a meal up a notch.

“They did have little packets of condiments that were like gold,” Wheelock said. “I remember a squeeze bottle of olive oil and balsamic vinegar and I added that to my food and it brought that flavor back.”

Two other staples, salt and pepper, come in liquid form, Wheelock said, because otherwise the grains could float into an astronaut’s eyes as they’re sitting down for a meal.

“It’s important to minimize the disruption of the bathroom experience because toilet paper doesn’t hang on the wall like it does on Earth,” Anderson said. “It doesn’t roll off that cardboard tube.”

Some people don’t mind the recycled water at the International Space Station, which Wheelock said has little taste to it. Anderson said he didn’t like drinking plain water, so he added coffee, tea or Tang to give it a boost of flavor.

Every time a cargo resupply mission arrived, fresh fruit and vegetables would be at the top of the load, Wheelock said. He ate an orange and enjoyed the aroma in the otherwise sterile space environment. He also remembered having a very new appreciation for a fresh apple he was given.

“I felt like Tom Hanks in the movie ‘Castaway,’ with the volleyball,” he said of the movie, in which Hanks plays a man stranded on an island with a volleyball named Wilson as his only friend. “I kept that Apple for two or three weeks.”

When Anderson was at the ISS, he said the best window for taking photos was in the Russian module. Now, the best spot is at the cupola observational module, the dome-shaped lookout that was launched to the ISS in 2010.

The isolation of space has some astronauts missing the little noises on Earth that are easy to take for granted.

“The things I missed the most were sounds of birds singing, children playing, the rain,” Wheelock said.

“I knew I would make mistakes because I’m a human, so I said, ‘I just hope mine are little ones.’ You feel that weightiness as well. NASA has put a lot of money into you and people are looking up to you to get the job done and you want to do it with style and grace and be a team player and a hard worker,” he said.

With the Russians living and working in their own module, it was possible to go an entire day without seeing cosmonaut colleagues, Wheelock said. His solution for bringing everyone together: Crew dinners every night.

“We had an agreement — each day, breakfast and lunch were on your own,” he said, “But we would have dinner together every night. Sometimes we’d go to Russia for dinner, sometimes the U.S. [area].”

With astronauts spending months at the space station, plenty of birthdays and holidays are celebrated. Anderson said he was even to pull off a video surprise for his wife’s birthday. Using some balloons that were left behind at the station, he said he surprised his wife on a video feed as she was giving a tour at the Johnson Space Center.

“I played our love song from when we dated,” he said. “I set the bar pretty high for males across the country.”

“Over the course of six months, you do experience people having harder days than others and sometimes it may be bad or sad news from Earth or frustration with some task or someone ticks someone off,” Wheelock said. “As the commander, I was sort of hyper-sensitive to watching everybody and keeping a close eye on how they responded to each other. It is a real exercise in developing and nurturing and encouraging a team effort.”

Take Care of Each Other

Astronauts spend as long as two years training together before a mission, but space can be an isolating experience. Wheelock said everyone would try to look out for their colleagues and rally around them if they were having a tough day.

Wheelock and Anderson both have great memories about their time spent in space and know they’re some of the lucky few who truly know what it’s like to live and work at the International Space Station.

“To see this piece of engineering artwork is quite amazing,” Wheelock said. “It really sets in right away — the feeling that you’re on borrowed time there.” 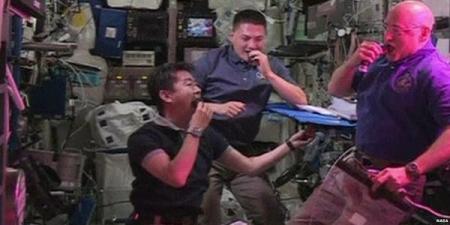 Lettuce all get excited about news today from the International Space Station (ISS)! Reported from the BBC:

Astronauts on board the International Space Station (ISS) have tasted space-grown lettuce.

The red romaine lettuce leaves were grown entirely by the team and it marks the start of the “veggie project” that will see more food grown in space.

NASA scientists say fresh food will have a positive impact on the astronauts’ health.

Astronauts have been growing crops in space for years for research, but this is the first time they have been allowed to eat their produce.

Looks like the astronauts will no longer have an excuse to not eat their veggies!

Rocket made it to drone spaceport ship, but landed hard. Close, but no cigar this time. Bodes well for the future tho.

Am super proud of my crew for making huge strides towards reusability on this mission. You guys rock!

Saturday at 4:45am ET – Launch of SpaceX Dragon rocket to ISS, and attempt at landing the first stage rocket on a boat! More info on the potentially historic launch at the SpaceX/NASA blog here. Info on the landing attempt here – which SpaceX says, “The odds of success are not great—perhaps 50% at best.”

The latest launch weather forecast, issued just this morning, continues to predict an 80 percent chance of favorable conditions for the liftoff of SpaceX CRS-5 at 4:47 a.m. EST tomorrow, Jan. 10. Meteorologists with the U.S. Air Force 45th Weather Squadron expect launch-time temperatures to be in the low 50s F, with the possibility of thick clouds posing the main concern.

The delayed NASA and SpaceX Rocket launch is now scheduled for Saturday, and weather report is 80% go for launch. But scheduled for 4:47 am ET… probably gonna sleep through it.