Check out this awesome research being done at MIT: 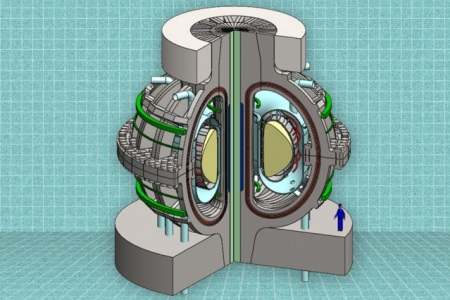 A cutaway view of the proposed ARC reactor. Thanks to powerful new magnet technology, the much smaller, less-expensive ARC reactor would deliver the same power output as a much larger reactor. Illustration courtesy of the MIT ARC team

It’s an old joke that many fusion scientists have grown tired of hearing: Practical nuclear fusion power plants are just 30 years away — and always will be.

But now, finally, the joke may no longer be true: Advances in magnet technology have enabled researchers at MIT to propose a new design for a practical compact tokamak fusion reactor — and it’s one that might be realized in as little as a decade, they say. The era of practical fusion power, which could offer a nearly inexhaustible energy resource, may be coming near.

The stronger magnetic field makes it possible to produce the required magnetic confinement of the superhot plasma — that is, the working material of a fusion reaction — but in a much smaller device than those previously envisioned. The reduction in size, in turn, makes the whole system less expensive and faster to build, and also allows for some ingenious new features in the power plant design. The proposed reactor, using a tokamak (donut-shaped) geometry that is widely studied, is described in a paper in the journal Fusion Engineering and Design, co-authored by Whyte, PhD candidate Brandon Sorbom, and 11 others at MIT. The paper started as a design class taught by Whyte and became a student-led project after the class ended.  END_OF_DOCUMENT_TOKEN_TO_BE_REPLACED