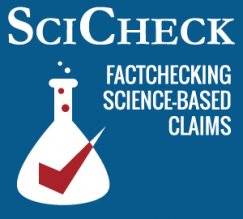 SciCheck spills the scientific T on water quality data – and schools Rep. Steve King on his recent claims (including the snarky, but hilarious point that ‘bison’ is more scientifically accurate than ‘buffalo’).

During a recent congressional hearing, Rep. Steve King of Iowa underestimated what scientists know about the relationship between farming practices and water quality.

To start, the term “bison” is scientifically more accurate than “buffalo” when referring to North American populations.

Hundreds of businesses including eBay, Nestle and General Mills have issued their support for Barack Obama’s clean power plan, billed as the strongest action ever on climate change by a US president.

The rules, being announced on Monday, are designed to cut emissions from power plants and have been strengthened in terms of the long-term ambition as originally proposed by the president last year, but slightly weakened in the short-term in a concession to states reliant on highly-polluting coal.

White House adviser Brian Deese said the Environmental Protection Agency (EPA) rules represented the “biggest step that any single president has made to curb the carbon pollution that is fuelling climate change”. The US is the world’s second biggest carbon emitter after China.

The rules are expected to trigger a “tsunami” of legal opposition from states and utilities who oppose the plans, which will significantly boost wind and solar power generation and force a switch away from coal power. Republican presidential hopefuls moved quickly to voice their opposition, saying they would be economically damaging.

But 365 businesses and investors wrote to 29 state governors to strongly support the rules, which they said would benefit the economy and create jobs.

Other signatories included Unilever, L’Oreal, Levi Strauss, L’Oreal, Staples, renewable energy company SunEdison and Trillium Asset Management, which manages $2.2bn in assets. It is the largest group of businesses to support the rules so far.

The final rules propose a 32% cut in carbon emissions from power plants by 2030 on 2005 levels, up from the initial proposal of 30%. However states will only have to comply by 2022 rather than 2020 as originally proposed, and will be able submit their plans on meeting the targets by 2018 instead of 2017.

Monday’s version of the rules also gives an explicit boost to wind and solar power, angering the natural gas industry which will still be a large beneficiary of the switch from coal to gas-fired power plants, which produce much lower emissions.

America’s Natural Gas Alliance, a trade body, said it was “disappointed and discouraged” by the rules. The Solar Energy Industries Association, on the other hand, said they were “historic” and “critically needed.”

The new rules will give a “give a head start to wind and solar deployment”, according to a White House fact sheet. “Drive more aggressive investment in clean energy technologies than the proposed rule, resulting in 30 % more renewable energy generation in 2030 and continuing to lower the costs of renewable energy,” it said.

Barack Obama, in a video address, emphasised the health benefits of reduced air pollution from coal plants, and a duty to future generations as reasons for the clean power rules.

“Power plants are the single biggest source of the harmful carbon pollution that contributes to climate change. But until now there have been no federal limits on the amount of that pollution those plants can dump into the air. Think about that,” he said.

Obama’s plan to bring in the rules to cut emissions from power plants – which account for a third of the US’s greenhouse gas emissions – date back to 2009 when the EPA declared carbon emissions a public danger, the first step towards regulating them.

The final rules are likely to be welcomed by the United Nations, which is hosting a climate summit in Paris at the end of the year to agree on deal on post-2020 curbs on emissions, as well as financing to help poorer countries deal with global warming.

Andrew Steer, president and CEO of the Washington DC-based thinktank the World Resources Institute, said: “The clean power plan should reassure international partners that the US administration is determined to deliver the 26-28% emissions reductions promised for 2025.

“Our analysis suggests that this rule can be implemented without technical or financial impediment, and in a manner that is likely to promote more, not less, economic prosperity.”

Gina McCarthy, the EPA’s administrator, said she believed the agency was on strong legal grounds for defending the rules from the legal challenges they are almost certain to face.

“Over the next few days we will hear the same tired old plays from the old special interests playbook,” said McCarthy.

Research!America has a great page where you can email your representatives and tell them we NEED CURES, NOT CUTs! Support medical research and advocate science by contacting your members of congress to fight cuts to science.

Deficit reduction is important, but there are ways to achieve it that do not set out nation back, threatening our global leadership and shortchanging the health and safety of the American people.

Congress has missed a major opportunity to fund advances in science and medicine that improve our nation’s health and economic outlook, with nearly flat funding for the National Institutes of Health in its FY15 omnibus bill. With millions of deaths annually from disease, millions more receiving devastating diagnoses every day and a decade of declining funding slowing the progress of scientists in research labs across the country, we call on Congress to renew its effort to fund vital medical research supported by NIH. Sustained increases to the NIH budget are necessary to close our nation’s innovation deficit — the widening gap between the current medical research funding levels and the investment required to ensure the U.S. remains the world’s innovation leader.

According to the University of Nebraska’s Medical Center’s Chancellor, Dr. Jeffrey Gold, treatment of 2 patients with ebola cost over 1 million dollars (Austin Powers anyone?). Apparently it is unclear who will pay for the patients care at the specialized center.

“I urge Congress to approve funding and policies supporting full reimbursement of the cost of care for these unique cases that are not recoverable from insurance policies. These are patients that federal government directed to UNMC and Emory,” Gold said. 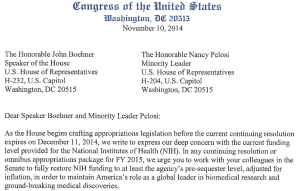 114 members of the House of Representatives have signed a letter to urge House leaders to increase NIH funding to pre-sequester levels! The effort was led by Suzan Delbene from Washington! Check out the letter with signatures here!

Today, Congresswoman Suzan DelBene led a group of more than 100 House colleagues in urging Speaker John Boehner and Minority Leader Nancy Pelosi to fully restore funding for the National Institutes of Health (NIH) to its pre-sequester level, adjusted for inflation, when the current continuing resolution expires on December 11, 2014. The letter was co-led by Congressman Chris Van Hollen, Ranking Member of the House Budget Committee, and is supported by a broad array of research advocacy organizations and biomedical research institutions.

CauseScience believes that the people who serve and have served our country deserve the best care and treatment! Here is an op-ed about science/research examining veterans and the support they need. Encourage Congress to actually do more than just talk about supporting our Veterans!

Are Americans too stupid to properly interpret GMO (Genetically Modified Organism) labeling? Yes, according to a congressional panel of representatives and experts, and in many cases, I would have to agree. See CauseScience’s past posts about GMO’s, including how the politics of GMO alarmists prove that not only Republicans are anti-science (more here). Michael McAuliff summarizes the findings of the congressional panel and gives background on GMO labeling laws for Huffington Post. Check it out!

People who oppose GMOs or want them labeled so that consumers can know what they’re eating are alarmists who thrive on fear and ignorance, the panel agreed. Labeling GMO foods would only stoke those fears, and harm a beneficial thing, so it should not be allowed, the lawmakers and witnesses agreed.

When the federal government invests in scientific research there is a tremendous return. Knowledge is gained; discoveries are made with profound implications for our health, safety and quality of life; future scientists, doctors, teachers and leaders are educated; innovations give birth to new technologies, companies and industries; and jobs are created. All of this activity advances the U.S. economy and our global competitiveness. When federal funding for research is flat-funded, reduced or subjected to the mandatory cuts of sequestration, we create an innovation deficit2 that threatens our economic advancement.

-The Science Coalition, Testimony for the Record Submitted to the United States Senate Committee on Appropriations Hearing on “Driving Innovation through Federal Investments”

Big points from the article:

“To accelerate innovation, protect health and save lives, policymakers must close the massive gap between the level of funding necessary to advance medical progress and the token funding levels allocated to research over the last several years.“

“A majority of Americans agree that basic scientific research that advances the frontiers of knowledge is necessary and should be supported by the federal government, according to polling commissioned by Research!America. And Americans understand that research is important to job creation and economic recovery.  Why doesn’t the federal budget reflect those truths?”

In conclusion, scientists want more funding, Americans AGREE that science is important (my previous post), and that scientists should get more funding, but for some reason… we aren’t getting more funding and the budget doesn’t reflect what the scientists and the people want.  I think we can all see where the holdup is: congress.

The solution?  From the blog post: It’s time for champions of science to engage the public and their elected representatives, and demand a stronger investment in the research that fuels discovery and innovation.