YAY Oscars! Last night’s Academy Awards ceremony did not disappoint- political commentary mixed with some humor, beautiful dresses (and people), some maaajor drama, and even some science! Pretty sure there was more mention of science during the Oscar’s than there has been during any of Trumps speeches ever (someone fact check me on that). Here are the highlights:

Hidden Figures nominated for several Oscars: While it didn’t take home any awards, Hidden Figures was nominated for Best Picture, Best Supporting Actress (Octavia Spencer), and Best Writing Adapted Screenplay.This film is the story of a team of African-American women mathematicians who served a vital role in NASA during the early years of the US space program. This is a major shoutout to both women and minorities in science, and it’s always great when a science film makes it to the awards show. Not to mention, our favorite scientist Neil deGrasse Tyson was live tweeting about the film throughout the Oscars.

The film @HiddenFigures reminds us: Even with America’s problems, in the 1960s we all knew the importance of Science & Math.

In the film @HiddenFigures, most of the equations and graphs on the chalkboards were accurately written. GOOD.

GE wins “Best Commercial” with it’s ad geared towards hiring more women scientists: YAAAS. This was one of the best commercials I’ve ever seen. Huge kudos to GE for dedicating efforts to hiring more women in STEM and advertising this initiative in a well-done commercial. It’s beautiful.

Shoutout to Science and Tech awards: While they unfortunately have their own separate event, it’s nice that the Oscars took the time to highlight some of the innovation made from the science and technology sectors and their contribution to film making. Some of these awards went to facial-performance-capture technology, animation technology, and improvements in digital camera systems.

From The Guardian: Look back at the highlights of Scott Kelly’s year in space. The US astronaut touched down on Earth after a 340-day mission on board the International Space Station which helped Nasa study the long-term effects of space travel. Kelly kept himself busy doing everything from science experiments to space walks and dressing up as a gorilla. Nasa are also able to compare his condition with that of his identical twin brother Mark on Earth

For the first time since the end of the space shuttle program in 2011, NASA is accepting applications for astronauts to start a new series of missions aimed at further space exploration with the goal of traveling to Mars.  Applications will be accepted from December 2015-February 2016, and successful candidates will be announced mid-2017.  From NASA:

In anticipation of returning human spaceflight launches to American soil, and in preparation for the agency’s journey to Mars, NASA announced it will soon begin accepting applications for the next class of astronaut candidates. With more human spacecraft in development in the United States today than at any other time in history, future astronauts will launch once again from the Space Coast of Florida on American-made commercial spacecraft, and carry out deep-space exploration missions that will advance a future human mission to Mars.

The agency will accept applications from Dec. 14 through mid-February and expects to announce candidates selected in mid-2017. Applications for consideration as a NASA Astronaut will be accepted at:

The next class of astronauts may fly on any of four different U.S. vessels during their careers: the International Space Station, two commercial crew spacecraft currently in development by U.S. companies, and NASA’s Orion deep-space exploration vehicle.

From pilots and engineers, to scientists and medical doctors, NASA selects qualified astronaut candidates from a diverse pool of U.S. citizens with a wide variety of backgrounds.

“This next group of American space explorers will inspire the Mars generation to reach for new heights, and help us realize the goal of putting boot prints on the Red Planet,” said NASA Administrator Charles Bolden. “Those selected for this service will fly on U.S. made spacecraft from American soil, advance critical science and research aboard the International Space Station, and help push the boundaries of technology in the proving ground of deep space.”

END_OF_DOCUMENT_TOKEN_TO_BE_REPLACED

If you can, check out the the annual Perseid meteor shower this week!! Unfortunately, living in NYC, means it will be hard for me to see much.

Luckily for those watching the skies, there will be a new moon, allowing for maximum darkness just when the Perseid meteor shower will be is at its best. The meteor shower’s peak occurs during the overnight hours of Wednesday (Aug. 12) and Thursday (Aug. 13). No fancy equipment is required; just a lawn chair and your naked eyes will be enough to see the “shooting stars.”

Loving this Astro Pic of the Day brought to you by NASA:

How different does sunset appear from Mars than from Earth? For comparison, two images of our common star were taken at sunset, one from Earth and one from Mars. These images were scaled to have same angular width and featured here side-by-side. A quick inspection will reveal that the Sun appears slightly smaller from Mars than from Earth. This makes sense since Mars is 50% further from the Sun than Earth. More striking, perhaps, is that the Martian sunset is noticeably bluer near the Sun than the typically orange colors near the setting Sun from Earth. The reason for the blue hues from Mars is not fully understood, but thought to be related to forward scattering properties of Martian dust. The terrestrial sunset was taken in 2012 March from Marseille, France, while the Martian sunset was captured last month by NASA‘s robotic Curiosity rover from Gale crater on Mars. 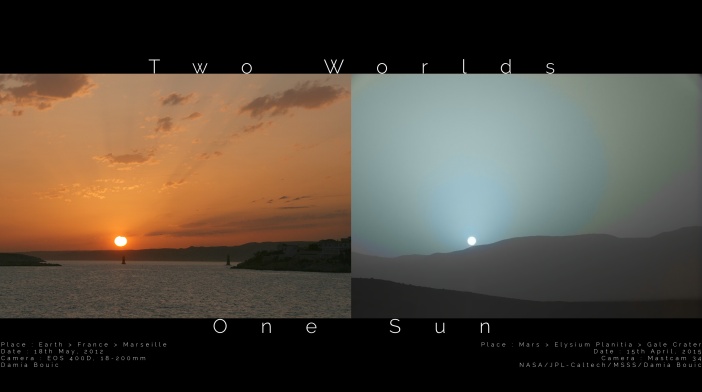 This year marks 25 years of amazing images and science from the Hubble Space Telescope.  To celebrate, we’ve assemble 25 images that represent both the beauty of the universe captured by Hubble and the important science realized by this wonderful telescope orbiting over our heads.

This visualization provides a three-dimensional perspective on Hubble’s 25th anniversary image of the nebula Gum 29 with the star cluster Westerlund 2 at its core. The flight traverses the foreground stars and approaches the lower left rim of the nebula Gum 29. Passing through the wispy darker clouds on the near side, the journey reveals bright gas illuminated by the intense radiation of the newly formed stars of cluster Westerlund 2. Within the nebula, several pillars of dark, dense gas are being shaped by the energetic light and strong stellar winds from the brilliant cluster of thousands of stars. Note that the visualization is intended to be a scientifically reasonable interpretation and that distances within the model are significantly compressed.

WOW! This Astro pic of the day is old, but nonetheless very cool.

Explanation: Why do some places on Earth have higher gravity than others? Sometimes the reason is unknown. To help better understand the Earth’s surface, sensitive measurements by the orbiting satellites GRACE and CHAMP were used to create a map of Earth’s gravitational field. Since a center for studying these data is in Potsdam, Germany, and since the result makes the Earth look somewhat like a potato, the resulting geoid has been referred to as the Potsdam Gravity Potato. High areas on this map, colored red, indicate areas where gravity is slightly stronger than usual, while in blue areas gravity is slightly weaker. Many bumps and valleys on the Potsdam Gravity Potato can be attributed to surface features, such as the North Mid-Atlantic Ridge and the Himalayan Mountains, but others cannot, and so might relate to unusually high or low sub-surface densities. Maps like this also help calibrate changes in the Earth’s surface including variable ocean currents and the melting of glaciers. The above map was made in 2005, but more recent and more sensitive gravity maps of Earth were produced in 2011.