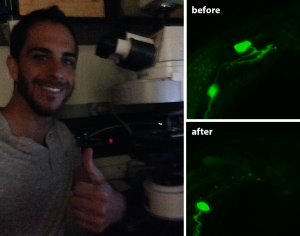 crestwind24– This morning I am shooting worms with lasers!! Or to be more specific, I am using a micropoint laser to ablate or kill a neuron in the C. elegans tail that I am studying (Video of micropoint laser to cut axons below)!! In the upper right picture above, I ablated the neuron at the top right, which you can see is gone after in the picture on the lower right (including its axon)! After the ablation of the neuron, I recover the worms and look at their behavior in order to determine what the neuron does!! It’s pretty cool, and is a little bit like playing a video game! Happy friday!!

psgurel– Today I am freezing grids for cryo electron microscopy (which I’ve mentioned previously).  In order for cryo EM to work, samples must be frozen very quickly to VERY cold temperatures. This preserves the samples in their natural state and has other benefits as well. Anything warmer than cryogenic temperatures (around -180C) will result in ice crystals that will contaminate the sample. This is me with the “grid plunger”, which essentially rapidly plunges EM grids into liquid ethane which is at cryogenic temp! 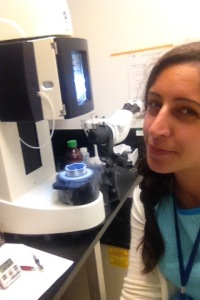