According to the National Weather Service, Boston has broken a record for the snowiest winter: 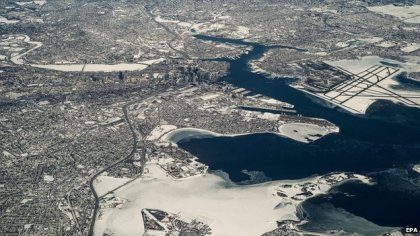 This season, the Massachusetts city saw more snowfall than any winter since 1872, when records were first kept.

Extreme weather patterns are all just another sign of climate change.  While Boston is buried under snow, California is experiencing an extreme drought… and some say that it only has one year left of water.  Climate change, or “global warming” results in extreme weather.  Although the average global temperatures are on the rise, this net result produces lots of different local weather patterns.  Essentially, the crazy amounts of snow in Boston are NOT evidence against global warming. The Boston Globe does a nice job explaining how this works:

Q. Can you explain how a warming climate might affect snowfall?

A. There are two competing effects as the climate warms: the increasing temperature causes a changeover from snow to rain, but it also increases the amount of water vapor in the atmosphere. For a particular place and time of year, which effect wins out depends on the temperature to begin with.

Q. Most people would think that a warmer climate would mean less snow, more modest blizzards. Why would big storms become more intense?

And no, throwing a snowball at congress does not counter the mountains of scientific data supporting climate change either.