Summarized in in Science News, developers have just created a new plastic film that can change colors when stretched. 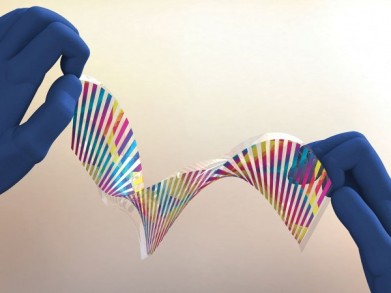 IMAGE COURTESY OF THE OPTICAL SOCIETY (OSA) IN CONJUNCTION WITH UC BERKELEY
Twisting a thin plastic film changes the spacing between tiny embedded silicon beams, altering the color of light they reflect.

Materials scientists often look to the natural world for inspiration, but usually it takes their inventions a while to catch up with biological discoveries. Not this time. Earlier this week, scientists in Switzerland revealed that chameleons change colors by expanding a lattice of tiny crystals just under their skin. Now, researchers in California are reporting that they’ve made a thin film that changes colors when they tug on it. Such films could produce color-changing sensors that give engineers a way to monitor potentially dangerous structural changes to everything from bridges to airplane wings.

This is awesome new technology that can eventually be useful for various purposes: from things like structural engineering to iPhone displays.  What is particularly fascinating to me is that the fundamental science behind developing this potential product has arisen from the scientific basis of how chameleons change color.  Essentially, BASIC RESEARCH to try and understand a biological system has once again proven to be useful for a variety of applications. Moral of the story: investing in basic research pays off.