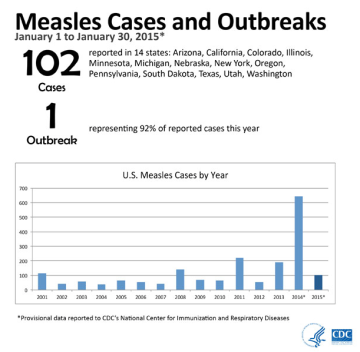 For lots of information on the current outbreak of measles, check out the CDC page here. It is truly alarming that last year had so many cases of a fully PREVENTABLE disease through vaccination. It is even more alarming that this year is likely on track to be worse. The outbreaks of measles have already resulted in a public outcry and debate over vaccines. Including President Obama commenting on the importance of vaccination and highlighting that anti-vaccination sentiment is not based on science. Hopefully the science will prevail!

The United States experienced a record number of measles cases during 2014, with 644 cases from 27 states reported to CDC’s National Center for Immunization and Respiratory Diseases (NCIRD). This is the greatest number of cases since measles elimination was documented in the U.S. in 2000.

– The majority of the people who got measles were unvaccinated.

– Measles is still common in many parts of the world including some countries in Europe, Asia, the Pacific, and Africa.

– Travelers with measles continue to bring the disease into the U.S.

– Measles can spread when it reaches a community in the U.S. where groups of people are unvaccinated.