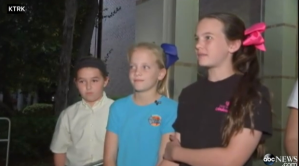 When the Antares rocket exploded on Tuesday, it destroyed not only the Cygnus spacecraft, but also the many science experiments it was carrying to the International Space Station. Many of the experiments were from young science students. The explosion hastily destroyed the work of the aspiring scientists in a fiery blaze, providing a valuable lesson about science. Disappointment, despair, and rejection. These feelings faced by the students is a perfect primer for the competitive, harsh, and unsupportive reality of today’s science careers. No classroom education could have better prepared the students for science than watching their work destroyed in a gigantic explosion before their own eyes (although in science, disappointment is rarely accompanied by such a spectacular visual).

Mary Crace Meyer, a fifth grader at Duchesne Academy in Houston, was part of a group of a group that created an experiment to see how algae grows in space under UV light, ABC affiliate KTRK reported. “Kind of weird to hear that something we’ve been working on all year long had just gone to waste and wasn’t there any more,” Meyer said.

Young Mary Meyer’s disappointment is great preparation for the disappointment experienced by scientists on a daily basis.  Hours spent meticulously following a protocol only to find out it didn’t work. Weeks of writing and editing a manuscript that gets rejected by the editor, or returned with overly critical comments from reviewers. Months or years of hard work gathering preliminary data for a grant that doesn’t get funded. Or worst, years of a scientific career wasted because the science is no longer deemed fundable, or the scientist can no longer handle the rejection and disappointment.

And in Michigan, students were disappointed to learn that their E. coli experiment, investigating gravity’s effects on the bacteria, was also destroyed in the blast. Another student group from Michigan had a project on the Antares rocket that examined microgravity’s effect on the muscle of shrimp.

The dashed hopes of the student scientists, who likely held their experiments near and dear to their hearts, will prepare them for the dashed hopes of scientists whose ideas are criticized for being too ‘basic’ or ‘too risky’. In this case, the unexplained explosion represents anonymous peer-reviewers, both having the same non-identity and de-motivating impact.

Some of the experiments were part of Student Spaceflight Experiments Program, which was launched in 2010 by the National Center for Earth and Space Science Education. Stacy Hamel, the program’s flight operations manager, told ABC News today that the students whose projects were destroyed will get another chance to send their experiments to space. “We’re working on a plan for a reflight mission as we speak,” Hamel said. “They will definitely be provided an opportunity to refly those experiments.”

While the explosion will likely turn many of the student scientists away from science, it has also weeded out those not strong enough to survive today’s science environment. Luckily, the students that can pick themselves up from scientific tragedy will realize that, like many scientists, they can continue their pursuit of science with the knowledge and preparation that more disappointment is sure to come.