A person traveling from Liberia to the United States has been diagnosed with Ebola, Dr. Thomas Frieden, director of the Centers for Disease Control and Prevention, told reporters Tuesday. The person, whose identity was not released, left Liberia on September 19 and arrived in the United States on September 20, he said. At that time, the person did not have symptoms. “But four or five days later” that person began to show symptoms, Frieden said. The person was hospitalized and isolated Sunday at a hospital in Texas, he said. 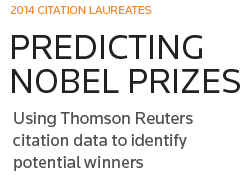 Next week is Nobel Week, when the 2014 Nobel Prizes will be announced. CauseScience will be posting the announced winners as they happen! Thomson Reuters has some predictions for the science Nobel Prizes based on citations. Check them out here. They have predicted three groups for the Nobel Prize in Medicine. These include:

– 3 scientists involved in the discovery of large-scale copy number variation and its association with diseases.

– and David Julius for elucidating mechanisms of pain sensation

Below is a nice infographic about the Thomson Reuters predictions: 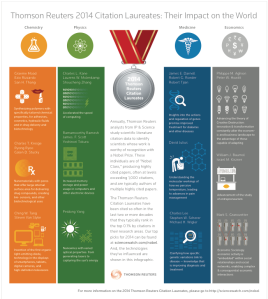 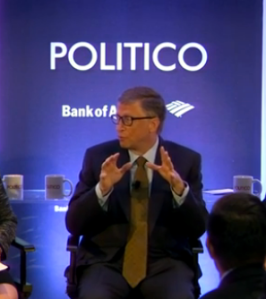 I think it is quite impressive what’s being pulled together, and I do think well be able to get this under control. We need to make sure that it doesn’t spread to other parts of Africa. That’s a particular challenge, and then we need to get it under control in these three locations (West African countries with outbreaks).

The U.S., as usual on world problems, is stepping up both in terms of the science, the understanding, and now the U.S. military’s logistic ability to get supplies in and build hospitals that are critical.

–Bill Gates on Politico.com after the Gates Foundation donated $50 million to fight the Ebola outbreak.

Research!America has announced the list of people and organizations it will honor as outstanding advocates for medical and health research at the 19th annual Advocacy Awards. Research!America describes the winners as ‘trailblazers in advancing medical progress to improve the health and economic security of our nation.’

“These exceptional leaders have advanced scientific discovery and innovation through their determination to improve the health of individuals worldwide,” said Mary Woolley, president and CEO of Research!America. “Their work has paved the way for others who are committed to ensuring that we save lives and sustain our nation’s global competitiveness with robust support for research.”

More info on each of the winners and descriptions of the terrific work they do at the Research!America blog and at the website for the Advocacy Awards.

Rachel Maddow: LOL! Voyager is the BRAVEST Satellite of all. Does that make you Happier, Timur? – Timur, a five-year-old Canadian boy, is deeply concerned about Voyager1’s safe passage through outer space. LOL!!! (Rachel’s “Best new Thing in the World.”) with Commander Chris Hadfield, first Canadian astronaut.
From TRMS, MSNBC

If you have a Facebook account, you are likely to have seen someone pour an ice bucket on themselves in the name of raising awareness for amyotropic lateral sclerosis (ALS). ALS is a disease that affects nerve cells in the brain, and it falls into a class of diseases known as neurodegenerative, which include diseases such as Parkinson’s, Alzheimer’s and Huntington’s. All of them are incurable and claim many lives around the world. These diseases can be caused by genetic mutations, but our understanding of what causes these remains poor.

A study, conducted by Manish Jaiswal and colleagues and led by Hugo Bellen and Michael Wangler at the Baylor College of Medicine, just published in Cell, takes a key step forward. They identified hundreds of new mutations in specific genes that are associated with various aspects of the development, function and maintenance of neural system in the fruit fly Drosophila melanogaster. The fruit fly is a stand-in for humans, and allows investigation of the molecular mechanisms of 26 human diseases, including ALS.

Researchers could use Drosophila melanogaster, because it is a well-established model organism to understand the molecular mechanisms of many human diseases. This is because: about 75% of human disease-causing genes are found in the fly in a similar form, it is easy to work with and breeds quickly, and many tools are available to manipulate any genes in it.

Messing with a fruit fly

The standard way of learning about genes is by studying the effect on the fly when a specific gene is “knocked out” from its genome. However, this strategy is sometimes ineffective – for instance, if the gene knocked out is an essential gene required for growth and development, then the fly will not fully grow, rendering the effort useless.

The authors overcame this limitation by inducing mutations in just a few cells in the fly, so that even if an essential gene is mutated, it does not kill the fly during its embryo-to-adult development. The effect of that mutation can be studied by looking at the tissue or organ where that mutation was supposed to act.

This is an important method because it helps to do experiments that can’t be done in humans. For instance, looking at the full genetic data of two siblings suffering from microcephaly – a disease in which size of the head is much smaller than expected – the researchers found that a specific gene, called ANKLE2, was mutated in both. This could be coincidence. But given there are 20,000 genes in the human genome, the chance of such a coincidence are quite low. To find out whether ANKLE2 is causing microcephaly, the researchers would need to conduct gene manipulation experiments in humans. Such experiments, however, are unethical.

That’s when studying fly and human genetics together becomes crucial. The authors found that flies with mutations in the same gene had small brains too. However, when the human ANKLE2 gene was introduced in these mutant flies, they had a normal brain size, providing evidence from the fly that ANKLE2 is the culprit.

This technique allowed the authors to isolate 614 new mutations in 165 genes that affect the development, function and maintenance of a functional neural system. But what is perhaps more important is that, these results have helped the authors to suggest a new method for identifying various disease-causing human genes by looking at the mutations in the genomes of patients alongside the mutations in corresponding Drosophila genes. They find that the disease-causing genes in humans have more than one copy of them in the fly, so if one can enlist which genes have more than one copy in the fly, they are likely to be disease-causing in humans.

As more people use this method, we will get closer and closer to finally understanding the genetic basis of many neurological and neurodegenerative diseases.

Mohit Kumar Jolly does not work for, consult to, own shares in or receive funding from any company or organisation that would benefit from this article, and has no relevant affiliations.

This article was originally published on The Conversation.
Read the original article.

Nick Statt reports at CNET on a new study describing the creation of diamond-like carbon nano threads. The study is published in Nature Materials by a group at Penn State.

Called a “diamond nanothread,” the ultra-thin material has a never-before-seen structure resembling the hexagonal rings of bonded carbon atoms that make up diamonds, the hardest known natural mineral on Earth. That makes these nanothreads potentially stronger and more resilient than the most advanced carbon nanotubes, which are similar super-durable and super-light structures composed of rolled up, one atom-thick sheets of carbon called graphene.

The new super-strong material, once it is better characterized, could have many uses. The authors of the study hope to make science-fiction a reality with their new threads.

“One of our wildest dreams for the nanomaterials we are developing is that they could be used to make the super-strong, lightweight cables that would make possible the construction of a ‘space elevator‘ which so far has existed only as a science-fiction idea,” Badding said.

Not the first place I would think to use a super strong cable, but to each their own.