Last month, I was lucky enough to go to a seminar given by the esteemed Dr. Tony Fauci for the Congressional Biomedical Research Caucus (CBRC) in Capitol Hill.  Dr. Fauci has been a pioneer for HIV/AIDS research and also a huge advocate for science funding.

Amidst all these depressing posts about how scientists don’t get enough funding, and how the future for science research is bleak, I just want to highlight this one success story to show you WHY it pays off to invest in science.

In summary, HIV/AIDS has been around for a while, but it began gaining attention in the early 1980’s with a major outbreak in the U.S.  This was a virus unlike any other, killing victims left and right.  The causes were totally unknown, and doctors were ill prepared to deal with this monster.  Luckily, our government poured money into HIV/AIDS research starting in the 1990’s and into the early 2000’s.  Check out the peak in the NIH funding budget over those years: 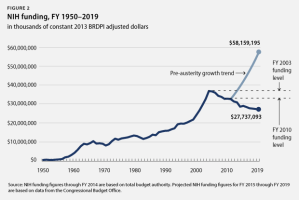 With all this funding, HIV/AIDS research took off and after years of hard work by talented and dedicated scientists/doctors, here is where we are: we have a MUCH better understanding of the disease, we can prevent transmission of the disease, we can control symptoms in those infected, we can prolong the lives of those infected, and we’re getting closer and closer to a potential cure.  Dr. Fauci said it best:  In the mid 1980’s, when he came across a patient infected with HIV, their life expectancy was 6-8months.  Now, 30 years of research progress later, the same patient infected with HIV can live a relatively normal life with a life expectancy ~75 years.  WOW.

I think this is best summed up by the CDC graph of AIDS deaths over time: 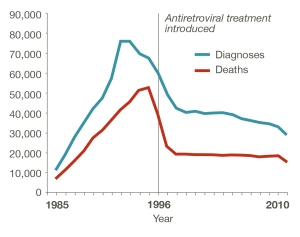 The HIV/AIDS story is not finished… there are still far too many cases, deaths and infections per year, still no cure, and there are definitely parts of the world where it is more prevalent.  Certainly, efforts need to be taken to continue to fight this disease. However, this is just a fantastic example of why it pays off to invest in science.  SO much progress has been made to control this disease and it’s in large part thanks to government funded research.  You would think that with other major killers and illnesses out there, like cancer and Alzheimer’s, we’d continue pouring money into these research efforts… And unfortunately that’s not the case.

2 thoughts on “A Success Story: How pouring money into scientific research has helped fight HIV/AIDS”